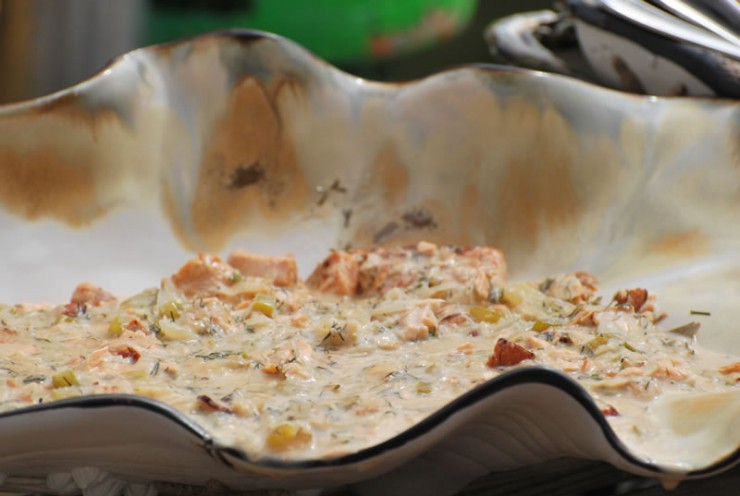 Around here chowder is about as common as ants at a picnic. We don’t waste a whole lot of time worrying whether it’s authentic or not either. Better to focus on flavor, which might just lead you to an uncommonly good chowder!

Toss the chopped bacon into a thick-bottomed stockpot with a splash of water. By adding water you allow the bacon to gradually release its fat and brown evenly without burning. Stir over medium-high heat until the bacon crisps nicely. Add a bit more water to loosen all those yummy brown bits in the pan and then add the onion and celery. Sauté them for a few minutes until they soften and smell great. No need to brown them.

Add the white wine, cream, clam juice, grated potato and bay leaf. Bring the mixture to a slow simmer, stirring frequently. Turn the heat down a bit and continue simmering until the potato softens, releasing its starch and thickening the chowder, about 20 minutes or so.

Very gently stir in the horseradish, smoked salmon and fresh dill and stir just until everything is heated through. Taste the chowder and season it well with salt and pepper. Break out the bowls, ladle in your creation and share!

Freestyle Twist: Thickeners? There are many ingredients used to thicken chowder, like flour or cornstarch, but the simplest and tastiest by far is the humble potato!