By Chef Michael Smith  •  5 years ago 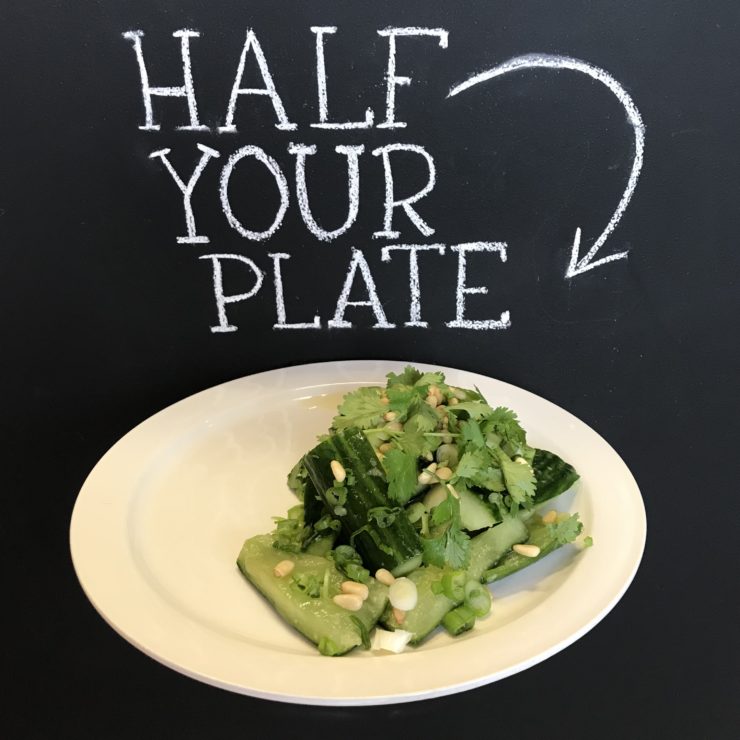 A smashed cucumber tastes very different from a sliced one. Brighter, fresher, more floral, and the crushed pieces more readily absorb the flavours around them. Most magically, though, smashing releases other new and delicious botanical flavours from the cucumber itself. It’s fun to fill Half Your Plate with bright ideas like these!

for the salad
a few handfuls of cilantro sprigs
2 or 3 thinly sliced green onions
1/2 cup of pine nuts or peanuts, preferably unsalted and roasted

Tightly trim the far ends of the cucumbers and enjoy a cooks snack while cutting the rest crosswise into 3” to 4” pieces. Cut each piece further in quarters lengthwise. Set up an assembly line and incredibly take the time to firmly smash each and every one. Press firmly under the bottom of a mason jar smashing until the skin cracks and the flesh breaks. Discard any seeds that separate.

Toss the remains with sugar and salt and drain in a strainer set in a larger bowl for at least 15 minutes or better yet until you’re ready to finish the salad in an hour or two. The cucumbers will release juices that would thin the dressing.

Meanwhile make the dressing. In a small bowl or mason jar combine the vinegar, oil, honey, fish sauce and sesame oil. Grate in the unpeeled rock hard frozen ginger through a microplane grater supported over the edge. Whisk together smoothly or thoroughly shake.

To finish the salad discard the liquid from the drained cucumbers, shaking them dryish before transferring to a festive service bowl. Drizzle with the dressing and toss the works thoroughly. Top with the green onion, cilantro and nuts. Serve immediately.

In the vegetable world smashing can release flavour compounds at the cellular level in a way that cleanly slicing those same cells wont. Cell walls break. Compounds mix. Flavours happen. Sometimes that’s nice. Sometimes not so much. Smashing a cucumber creates delicious new cucumber flavours but an onion treated the same way is obnoxious.