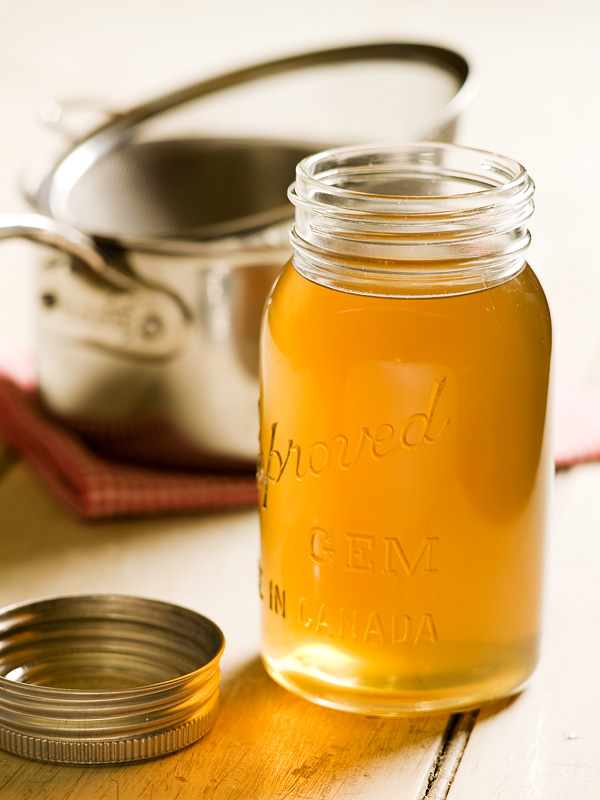 A pot full of simmering chicken broth is the essence of home cooking: true flavour brimming with hearty goodness, ready to launch a thousand other dishes. Try making a batch, dividing it into easily used amounts and keeping them in your freezer, ready for whatever idea comes along. You can use any chicken, but a stewing hen will have the most flavour.

Toss everything into a large stockpot and cover with cold water. Begin heating over high heat. Almost bring the water to a boil, and then reduce the heat and maintain at a gentle simmer. It’s not necessary to cover the pot. As the broth begins to simmer the chicken will release various impurities and fat. These will foam and rise to the top. Skim them away so they don’t cloud the broth, but don’t worry if some stay behind. They won’t affect the flavour.

Continue simmering for about 2 hours or so until the chicken is cooked through and the broth is flavourful.

Remove the chicken meat and reserve for another use.

Strain the broth and cool at room temperature for an hour or so before covering and refrigerating. As the broth cools in the refrigerator, any remaining fat will rise to the surface and harden, where it can be easily removed and discarded.

For a deeper, richer flavour, try roasting the chicken parts first, at 350 °F (180 °C), until they are golden brown and caramelized. Be sure to dissolve any lingering golden bits in the roasting pan and add them to the simmering stock; they’ll be full of concentrated flavour. It is possible to flavour a chicken broth with any number of leftover vegetables and fresh herbs, but it’s not always a good idea. Because the broth is usually used as a flavour base for another dish it’s best to flavour it simply, to keep it neutral so it doesn’t overpower the dish.