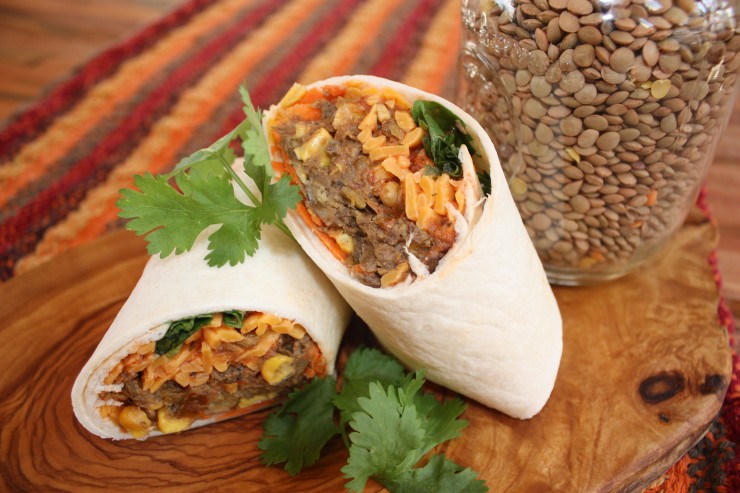 My kids love these burritos but they don’t know why. I do though. Lentils are flavour sponges. Lentils do such a good job absorbing the bright sunny flavours of the southwest that no one notices the missing **** in this burrito. They notice the crisp smoky bacon though!

Begin by crisping the bacon. Toss it into a sauce pot along with a splash or two of water. Bring the mixture to a simmer. As the bacon begins simmering the water will encourage it to cook evenly. Eventually the water boils away leaving the bacon bits to crisp in the rendered bacon fat. Be patient. When the bits are crisp strain them out and reserve.

Toss the onion and seasonings into the pan and stir until the flavours brighten and the textures soften, 5 minutes or so.

Pour in the lentils and water and bring the mixture to a slow, steady, simmer. Continue cooking as the lentils absorb the moisture and begin softening. Stir occasionally and keep an eye on the works. Eventually they’ll become tender and absorb all the water, about 45 minutes or so. If the mixtures still seems a bit wet for a burrito filling just simmer a few minutes longer. In the last few minutes of cooking stir the corn, salt and hot sauce into the works.

Lay 4 tortilla shells out on your work surface and evenly divide the filling between them. Top with grated carrot, grated cheese and salsa. Sprinkle on the crisp bacon and top with lots of cilantro. Fold in the sides and roll the works up tightly. Shout ‘caliente!’ Serve and share!