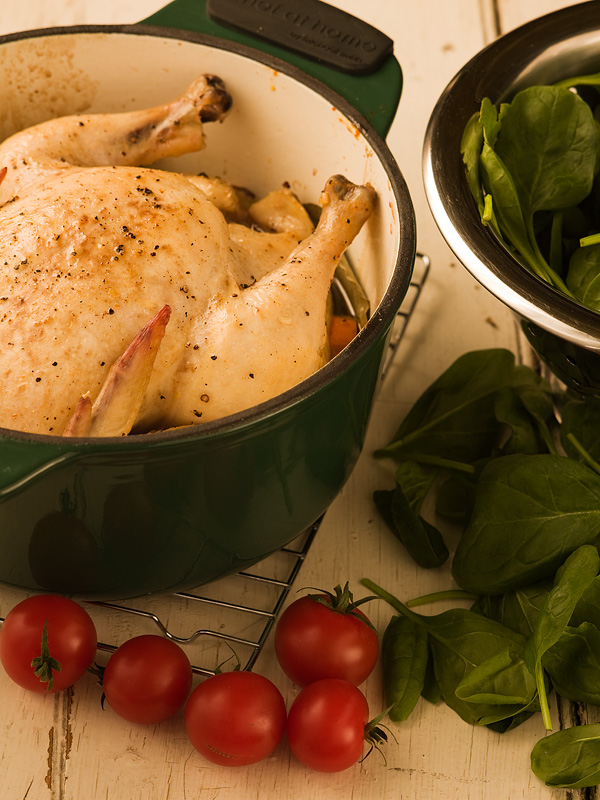 Usually when you’re cooking a whole chicken, the focus is on the crispy skin, but what if the goal is deeply flavoured moist chicken meat instead? Baking in a tightly covered pot is the answer. It also happens to be one of the simplest ways to cook a chicken, and the tastiest because this covered cooking method makes lots of true, concentrated chicken flavor.

Toss the onions, garlic, celery and carrot into a Dutch oven and lightly season them with salt and pepper. Add the rosemary and bay leaves. Stir everything together.

Season the chicken and rest it on top of the vegetables. Cover the pot tightly with a tight-fitting lid and bake the chicken for 90 minutes or so, until a thermometer inserted in one of the thighs reads 180 °F (82 °C).

Remove the chicken and rest on a plate, covered with foil for 15 minutes or so before slicing.

Meanwhile, place the Dutch oven over medium-high heat and bring the onion mixture to a simmer. Add the spinach and tomatoes and stir until the spinach has wilted and the tomatoes have heated through. Season to taste.

Slice the chicken, removing all the meat. Toss the meat with the spinach and tomato mixture. Serve immediately.