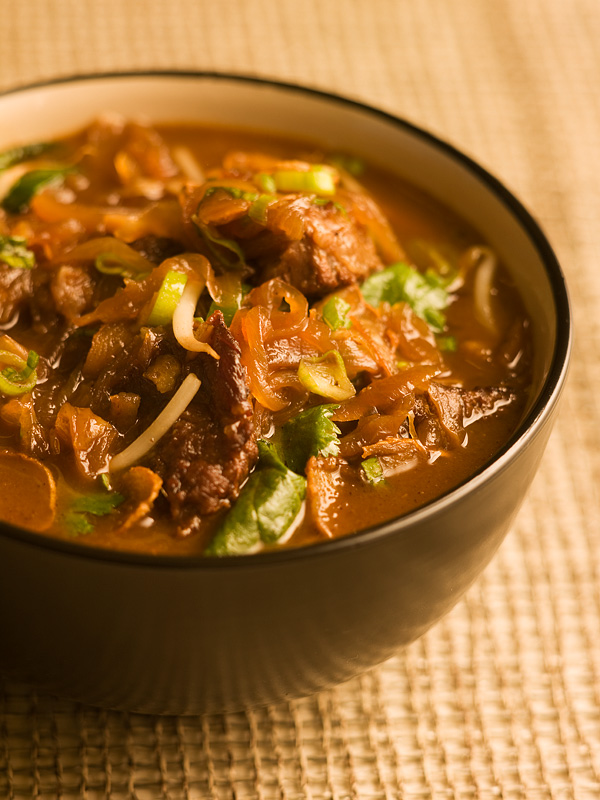 Beef stews are a part of cooking all over the world. Cooks everywhere know they can simmer tough, inexpensive cuts of meat in a flavourful liquid then fill their bowls with a rich tender stew. My family loves this “Asian” version ladled over spinach leaves and bean sprouts. It’s a stew and a salad in the same bowl!

Preheat a large pot over a medium-high heat and then splash in enough oil to thinly coat the bottom. Season, then sear the meat until it’s evenly browned on all sides. Searing the meat first adds lots of rich caramelized flavours before adding the liquids that lower the pot’s temperature to below what’s needed to brown. Remove the meat and set aside for a moment.

Return the meat to the pot and add the beef broth, orange juice, marmalade, soy sauce and five-spice powder. Bring the works to a simmer and then reduce the heat to the lowest setting that will maintain the simmer. Place a tight-fitting lid on the pot to contain the tenderizing steam. Continue simmering until the meat is tender enough to break into smaller pieces, about 1 hour. Taste and season the broth.

Divide the spinach and bean sprouts evenly between 4 bowls. Stir the green onions and cilantro leaves into the stewreserving a fewand ladle over the veggies. Top with a sprinkling of the reserved cilantro leaves and enjoy!

For some bright spicy Thai flavour, use a tablespoonful of Thai curry paste instead of the Chinese five-spice powder.