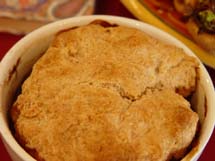 I love the way stewing transforms inexpensive, tough cuts of beef into tasty, tender stew. The earthy flavours of root vegetables combine with the full body of beef stock and aromatic red wine to form a rich flavour base. The only thing better than a bowlful of hearty stew is the same bowl with a biscuit topping!
Ease of Preparation: Moderate

Preheat a large thick-bottomed pot over medium-high heat. Meanwhile, pat the beef dry with a clean towel then cut it into large cubes and season it. Add a splash of oil to the pot – covering the bottom in a thin layer – then toss in enough meat to form a single sizzling layer. Sear the meat on every side until it’s evenly browned. As it browns remove it from the pan, adding more oil and meat as needed. Once the meat is done discard the remaining oil – but keep all the browned bits in the pan. They’ll add lots of flavour!

Add half of the vegetables – reserving the other half – and all the meat back to the pot. Add the tomato paste, baby onions and enough wine and beef stock to just barely cover the works. Add the bay leaves and rosemary and bring the pot to a simmer. Continue cooking until the meat is almost tender, about an hour, then add the remaining vegetables. I add them in two batches so the first will dissolve into the stew while the second retains its shape, colour and texture. Continue simmering until the meat and veggies are tender, about another thirty minutes.

Meanwhile, make a batch of your favourite biscuits. When the stew is tender season it then stir in the peas and ladle it into several ovenproof bowls. Fit a piece of biscuit dough onto each bowl. Place them on a tray to catch any drips then bake in a preheated 400 degree F oven. Cook until the biscuit toppings are nicely browned and the stew is heated through, about thirty minutes.