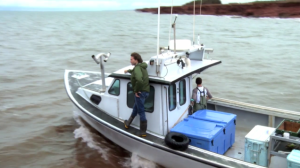 The waters surrounding Prince Edward Island are some of the most fertile in the world. We’re blessed with many fisheries but without question our most popular and valuable is lobster. This tasty crustacean is a genuine culinary ambassador for the island!

On my end of the island one of the first signs of spring every year is the appearance of giant stacks of hand made lobster traps down at the wharf. The spring lobster season starts around May 1st and we all eagerly look forward to our first ‘feed.’ As the first boats of the season steam back ashore it feels like a holiday. The docks are lined with well-wishers young and old and that night everyone enjoys a lobster or three.

I’ve been out on lobster boats many times 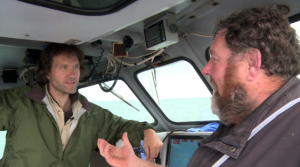 but recently traveled all the way to the other end of the island to go fishing with Francis Morrissey. No one knows more about lobster than he does so I wasn’t surprised that I learned a few new things that day. And not just about how to catch lobster.

Francis shared with me his way of cooking lobster. He prefers to boil them in seawater, then refrigerate them and enjoy them cold. In fact most islanders prefer them cold. He also pointed out that’s its best to store them upside down so their tasty juices don’t leak out!

Lobster fishermen are very competitive with each other but also cooperate closely. Every port is part of a district with a specific season when were allowed to fish. Once the boats steam out of port there are no rules that regulate exactly where they may set their traps but there is unwritten tradition more powerful than any law. 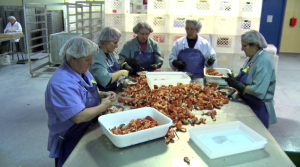 Fathers routinely pass along to their sons their gear and informal rights to an area. Somehow upwards of 50 boats sort out how best to cover their district without overlapping each other. Everyone agrees to run their sets in the same direction so their lines don’t get tangled and once back on shore you’ll never hear a lobster fisherman bragging about his catch. 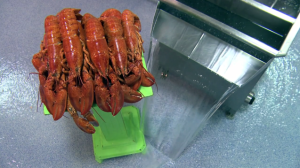 Lobster fishing is very hard work. Most boats head out long before dawn to take advantage of calmer waters in the early morning. It’s cold, wet, relentless work but it’s fulfilling work, real work. Next time you’re on Prince Edward Island head down to the nearest wharf and strike up a conversation with a fisherman. You’ll find them friendly and proud. Make sure you thank them for their hard work!